Stretch-O-Mutt is a hero introduced in season 2 and a protagonist in the series. He is a Retriever mix.

Buddy was a guard dog at S.T.A.R. Labs who accidentally fell into a vat of Experimental Elastic Solution and developed stretching powers similar to Plastic Man. He can sometimes be too silly for his own good. He once saved the Dog Star Stars spaceship from Mechanikat by morphing into the shapes of the members of the Dog Star Patrol.

Elasticity: Due to falling into a vat of Experimental Elastic Solution, Buddy is made out of rubber and can stretch into various lengths and change shape. His rubber body can also resist deadly germs since they bounce off him. 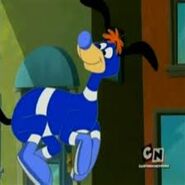 One Episode Stretch O Mutt is in

Add a photo to this gallery
Retrieved from "https://krypto.fandom.com/wiki/Stretch-O-Mutt?oldid=10721"
Community content is available under CC-BY-SA unless otherwise noted.