Streaky the Supercat is the pet cat of Kevin's next door neighbor, Andrea Sussman and the dueteragonist of the series. His debut is The Streaky Story. He is Squeaky's uncle and mentor.

Streaky was being chased by three dogs when he accidentally entered a laboratory he thought was the veterinarian's office. He accidentally turned on a doubling ray that duplicated everything in the laboratory. Krypto deflected the ray with his super coat and it hit Streaky. Instead of copying Krypto, the ray copied his powers onto Streaky, turning him into Supercat.

Streaky was a character introduced in February 1960's Action Comics #261. He has been Supergirl's pet for a long time.

Kryptonian: Due to the effects of duplicating ray reflecting off of Krypto, Streaky possesses the same abilities as Krypto. 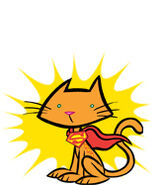 DC Super-Pets!
Add a photo to this gallery

Krypto the Superdog Wiki has a collection of images and media related to Streaky the Supercat.

Streaky's face resembles Top Cat. But with a smaller nose and bigger ears.

Retrieved from "https://krypto.fandom.com/wiki/Streaky_the_Supercat?oldid=10926"
Community content is available under CC-BY-SA unless otherwise noted.