Mechanikat's origins are completely unclear. It's only known and implied that he was a normal cat who was once injured and was forced to wear mechanical limbs to survive, becoming a cyborg. While the circumstances of who left him injured are unknown, it's also known that he hated dogs, possibly because one could have been the one who injured him, starting to plan to conquer the Earth and eliminate every dog of the galaxy. 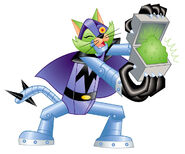 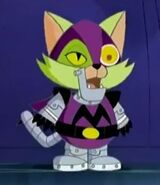 Add a photo to this gallery
Retrieved from "https://krypto.fandom.com/wiki/Mechanikat?oldid=9624"
Community content is available under CC-BY-SA unless otherwise noted.