Krypto is Superman's pet dog and the main protagonist of the series. He is a White Labrabull mix.

When Krypto was a puppy, Superman's father built a rocket, and placed Krypto into it to test it. Krypto was playing with his ball when the rocket malfunctioned, and released a sleeping gas to put Krypto to sleep. When he arrived in Earth's solar system he woke up and found himself fully grown. The rocket's computer system gave him a collar and and an ID with an intergalactic communicator.

His rocket crashed in the city of Metropolis. There, he finds a boy named Kevin, whose family accepts him as the new family pet. After rescuing a ship with zoo animals, he appears on the news and later that night, Superman arrives at Kevin's bedroom window to be reunited with Krypto. He gives Kevin his permission to keep Krypto with him because of his extremely busy schedule.

Like Superman, Krypto is weak against kryptonite. His allies are Streaky the Supercat, Ace the Bat-Hound, Robbie the Robin and The Dog Star Patrol. His enemies are Mechanikat, Snooky Wookums and Ignatius.

This version of Krypto has a slightly different origin story than the comics.

Kryptonian Physiology: Under the effects of a "yellow" sun, Krypto possesses the same potential powers as an average Kryptonian.

Kryptonian Physiology Weaknesses: Under the effects of a "yellow" sun, Krypto possesses the same potential weaknesses as an average Kryptonian.

The New Adventures of Superman

Batman: The Brave and the Bold 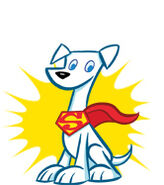 DC Super-Pets!
Add a photo to this gallery

Krypto the Superdog Wiki has a collection of images and media related to Krypto.
Retrieved from "https://krypto.fandom.com/wiki/Krypto?oldid=10524"
Community content is available under CC-BY-SA unless otherwise noted.