Feline Fatale is seventh episode from the first season of Krypto the Superdog. It was originally aired in the United States on April 8, 2005.

A blonde female cat is walking around Andrea's house, where Streaky is being dressed against his own will. Having been forced to wear outfit suitable for a female, Streaky has enough and abandons the house through window. While Andrea complains about her cat not being fond of fancy clothes, the female cat sneaks past, tries the hat and impresses Andrea.

Meanwhile, Krypto and Streaky are performing aerial patrol, where the cat complains about his owner and dress code she attempts to cast. Having came back home, Streaky discovers that Andrea found new feline friend for dress parties and she named the cat "Delilah". Blondie takes over Streaky's sleeping basket - when the male tries to complain about it, he gets quite a violent refute causing him to find another place to sleep.

During Streaky's rest on couch, Delilah tears apart curtains in the same room Streaky sleeps and leaves pieces of material on the tomcat. Sight of damages annoys Andrea's mother that much, that she throws Streaky away home out of rage. Having been encouraged by Krypto to come back, Streaky returns with plan to discuss with Del their place at Andrea's house. The blonde kitty has been awaiting him and she presents Streaky a bowl of fish soup, which turns out to be Andrea's mother's dinner. As a result, Streaky is banned from his house again.

It turns out, that Delilah got rid off Streaky because he disturbed her (as Agent 9L) in Mechanikat's plans of deploying disintegrator ray against Krypto in Andrea's house. After brief investigation, Andrea discovers, that Delilah framed Streaky in tearing curtains apart and stealing mom's dinner. Having been unmasked, Delilah finds out that Streaky stole the device she was to use against the super dog.

The Super cat doesn't manage to fly far with the disintegrator ray, he drops it in the alley behind Andrea's house. Delilah reaches the control panel and shows Streaky the weapon in action. Krypto arrives just in time and destroys the ray machine. Agent 9L attempts to flee, but she ends up in waste basket.

The episode ends with Andrea dressing Streaky in musketeer outfit, which Supercat is fond of. 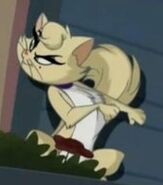 QuickTimePlayer 2016-07-19 19-50-46-62.png
Add a photo to this gallery
</span>
Retrieved from "https://krypto.fandom.com/wiki/Feline_Fatale?oldid=10551"
Community content is available under CC-BY-SA unless otherwise noted.